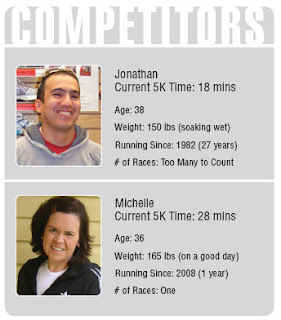 Now that I've finished my 10K race, I need a new challenge. Most people would say... go for a half marathon... but that is what everyone does... so instead I've decided that my next athletic challenge is to beat my co-worker Jonathan in a 5K race!

I'm not sure how this ridiculous challenge actually came to fruition... but it all started when Jonathan was teasing me that I kick my ankles when I run and then proceeded to demonstrate a pathetic Richard Simmons run around the store as if he was pretending to be me. The shock of his impersonation (though funny) unleashed the competitor in me, that's when I challenged Jonathan to a race and told him that he runs like a girl! *smiles*

At first glance Jonathan doesn't look that intimidating, but now that I've learned more about his elite athletic background I'm starting to realize I may have bitten off more than I can chew. Though I've never seen Jonathan run before, I've heard rumours that he's quite fast. Turns out he can run 5K ten minutes faster than me... so obviously I have some work to do before race day! I just found out Wednesday that he's ran a half marathon in 1 hr 30 mins... are you kidding me... was he on a skateboard? I'm betting on the fact that these are all old times and that he's now past his prime. He'll have all winter to get plump and lethargic, while I aggressively train to crush him in our race or this is what I'm hoping will happen anyway! 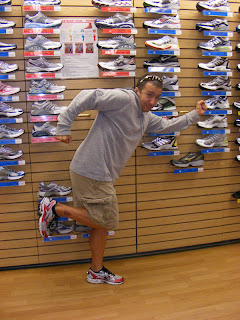 In Photo: Jonathan Kirk pretending to look athletic at work

Jonathan has graciously given me 6 months to train for the race. Jonathan claims that he will "just show up"... highly unlikely... I wouldn't be surprised if Jonathan's already called his old track and field coach to start secretly training with him!

Jonathan and I trash talk each other on a daily basis (but it's all in good fun)... deep down he knows I'm the stronger athlete and every time he makes fun of me... I know it's just a defence mechanism he uses to mask his jealousy over the fact that I'm more of an runner than he is. *grin - ok maybe not*

The first part of my challenge over the next 6 months will be to knock 5 minutes off my 5K time. To train for this race, I have no choice but to temporarily cut out recovery walks. Normally, I wouldn't recommend this type of approach because I'm a strong advocate of interval running, but desperate times call for desperate measures. Jonathan doesn't stop on his 5K run, so I certainly can't either if I expect to have any chance in beating him.

Considering the fact to date my biggest athletic accomplishment was winning Most Sportsman-like in girls softball when I was 12... it doesn't really compare to Jonathan's resume (which is longer than Snoop Dogg's rap sheet)... he has run in over 20 marathons, has travelled around the world racing and has been an Ironman 6 times... obviously the odds are not in my favor to win. To make things a little bit more fair, Jonathan has agreed that I can somehow handicap him for the race. It's still undecided exactly how we'll do this. Personally, I think if he had to run backwards for the entire 5K it would be fair... but more realistically he'll probably give me a 5 minute lead time or I'll make him run barefoot over gravel. If you have suggestions, by all means we are open to hearing your ideas!

I've proposed that we race 5K on the Salt Marsh Trail in Cole Harbour. The old railroad track route is perfect because it's flat and straight, which means I won't get lost and will have no tempation to cheat by finding a short-cut!

We've set the challenge for Saturday, May 1, 2010. Of course there will be a trophy... a lifetime of bragging rights and official race t-shirts. I'm thinking about getting this t-shirt made for myself: 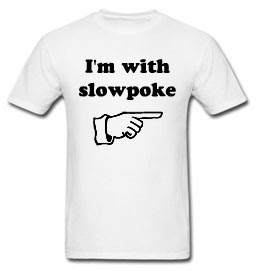