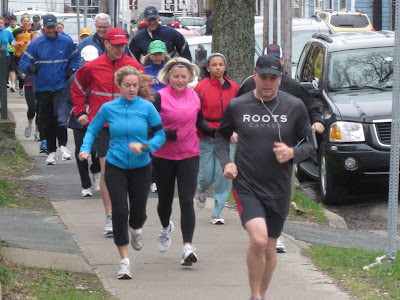 Dartmouth’s Heart & Sole Running Club and the Halifax Trail Runners (two of the largest free running clubs in metro), organized a Trails to Streets Exchange Program for their members this weekend and it was a huge success!

The goal was to give members from each running club an opportunity to meet new people and experience something different!

On Saturday, Halifax Trail Runners gave their visitors a 5K guided tour of their favorite trail system near Long Lake in Halifax. They were skillfully guided through the most picturesque woods within the city limits. It was a wet week in metro, which made for soggy conditions in the woods, but a group of 17 runners happily zig zagged through the trails, jumping over roots and rocks, under branches and into the mud. The runners stopped on rock peaks, where they’d take a moment to enjoy the views of the lakes and catch their breath. They managed to cross swampy areas by balancing themselves over hand-made 2x4 bridges and planks that were strategically placed by previous trail enthusiasts. A few runners did get soakers, but that was all in the fun of it and it was unanimous among the group that they enjoyed their off-roading experience.

The runners had just enough time to try out their sneakers for Sundays adventure when Heart & Sole Running Club returned the favor by welcoming the trail runners to a 60 minute city run along the beautiful lakes of Dartmouth. Even with the damp mist and strong winds, over 30 runners showed up at Heart & Sole Running Club’s regular Sunday morning meeting spot, Two If By Sea Café. This cheerful group welcomed everyone and showed them how enjoyable it can be to run within the different communities of Dartmouth. Locals probably wondered if there was a race going on, as they witnessed a mass of runners heading up Ochterlony Street together. The group ranged from runners who just started to a couple months ago to those who have run for years. No matter the distance they traveled or the pace they ran, the one thing all of these people have in common is the passion to run.

This inclusive running groups encouraged all participants to run at a pace they felt comfortable with and no one was left behind! After the weekend, the runners from both groups enjoyed well deserved coffee and croissants and a bit of socializing too. Many runners found new running partners and all enjoyed the adrenaline rush of a great weekend enjoying fresh air and exercise!

Halifax Trail Runners is currently working with Salomon Running on their coast-to-coast launch "Street to Trail Tour", proving to all runners the benefits of both endeavours. The event this weekend in metro was proof that all runners can benefit from a balance of both types of running (especially when they have the right type of footwear)!

Both clubs participate in races throughout the year. The trail exposure for the street runners will help them on May 14th, when they attend the Benny Bulldog Trail Race in Shubie Park. This is a 5K charity race organized by Dartmouth running phenomena, Stacy Chesnutt. Runners can expect to enjoy manicured trails, rolling hills and a well organized race. Heart & Sole Running Club has over 40 members registering to race through the trails that day and is encouraging their new friends from the Halifax Trail Runners to enjoy this fabulous event with them too.

To join either of these clubs or learn more visit their websites: www.hfxtrailrunners.com and www.heartandsolerunningclub.com

Michelle Kempton is a co-founder of the Heart and Sole Running Club. Email her at heartandsolerunningclub@gmail.com. Follow the club on twitter @runindartmouth.
Posted by Michelle Kempton at Saturday, May 08, 2010