When I run it's on me 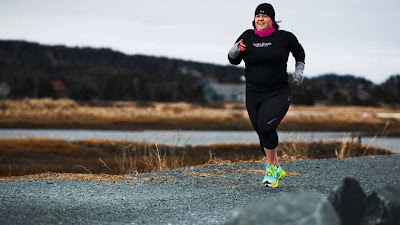 Michelle Kempton runs along the shore in Cow Bay. Kempton once had trouble getting up a flight of stairs or going for a walk. Then the running bug hit. (CHRISTIAN LAFORCE / Staff)

Published in: The Chronicle Herald
Written by: Bill Spurr

AT AGE 33 and morbidly obese, Michelle Kempton knew it was time to take stock.

Growing up in Lawrencetown, near Dartmouth, Kempton’s total athletic history consisted of a year of softball in Grade 6, after which she was named Most Sportsmanlike. The inactivity had predictable results.

"I always had a weight problem, my whole life," she said. "Even pictures from when I was a little kid — I was chubby. Then I got really overweight, and then I had twins seven years ago.

"I didn’t gain much weight with them, because I was already big. I was 260 pounds when I got pregnant, and went up to 285, so I only gained 25 pounds with twins."

Kempton’s dad was healthy and fit and exercised regularly. When he almost died of a heart attack, she realized she might also have heredity working against her and had better find a way to keep from dying young. She hadn’t been diagnosed with any health issues yet, but she was tired all the time.

"And I was unhappy and I didn’t feel pretty and I was moping. If I was sitting on the couch, it would be an effort just to go to the fridge to get something to eat, or to climb up a flight of stairs, I would be winded. I didn’t ever want to go for a nice walk because it was work," she said.

"There was this moment, when I was really big, my husband and I did go for a walk in Shubie (Park), and there’s a really big hill there. I remember being completely mortified that I couldn’t even walk up that hill, and I had to take two breaks. A couple of years later, I was running up it full tilt, passing people."

What happened in the interim? Running. Or, at first, a reasonable facsimile of running.

"He suggested that I do some interval running. He said: ‘I just want you to run one minute, then walk a minute, do it for 20 minutes total.’ The first time I tried to do that, it was brutal. I had this awful taste in my mouth and I wasn’t even running fast, it was just above a walk. I had to remind myself why I wanted to do this, to feel better about myself."

For almost two years, worried she didn’t look athletic enough, Kempton would only run alone. But dramatic weight loss from running as much as 60 kilometres per week transformed the activity into something social, and fun.

"Once I lost 120 pounds I looked like what I thought a runner should look like. Now I realize that everybody who’s running is a runner, but when I was big I didn’t think that. Now that I’m in the community I realize there’s people of all shapes and sizes that run, but I was scared to join that group, because I’d never been part of a team, never been part of a club."

But as anybody who has lost weight knows, it’s just as big a challenge to keep it off. Kempton had been self-employed during the two years she slimmed down, but once she took an office job, the new clothes started to get tight again.

Then a second epiphany. Instead of working as a computer programmer for an income, Kempton decided to do what she loved — teach running clinics full time, something she’d already been doing on the side.

She also started a race management company, which will run three races this summer, and she and five friends founded the Heart and Sole running club last year. When the club celebrated its first anniversary earlier this month, it had more than 550 members.

"I’m lucky my husband supports the idea of me being happy, and doing a job I enjoy. That’s a key component, him saying it’s OK, we’ll take the risk," said Kempton, calling Dartmouth an "amazing running community" where she can feel supported.

"I like that with running I am not accountable to anybody else except myself. If I was playing baseball and struck out, I’d feel bad for the team. When I run it’s on me. When I’m running up a hill and I want to take a break, I tell myself that at the top of that hill, if I’m walking, I’m going to be disappointed in myself. You have to do this for you."
Posted by Michelle Kempton at Tuesday, February 21, 2012