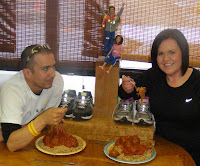 Back in October when Jonathan and I decided to race each other, I was running 5K in 28 minutes. By December (with determination and by cutting out recovery walks) I was running 5K in 25 minutes. This rapid improvement made me over-confident in my athletic abilities and I was pretty certain with a 1K head-start that I’d easily win our race. At the time, I was starting everyday with a 5K run. I was also instructing two Learn to Run Clinics (4 days a week) at the Running Room. That busy running schedule dramatically changed over the winter, and I quickly transformed from a stealth running machine into a couch potatoe! The month of December my running clinics were done, the holidays came and my training became less of a priority.

I live in a rural area, so with limited street lights and an abundance of nocturnal predators, running outside after dark isn’t an option so I moved my training inside for the winter. Every time I ran on the treadmill, I was bored. In an attempt to keep motivated, I started to run at an indoor track. I quickly became obsessed with my run times, but it seemed like every time I went for a run that I was somehow getting slower. Blahhhhhhh pretty much sums up the feeling that I had before, during and after training on the track.

In January, I knew I should be training to increase my speed but the dark cold mornings gave me little motivation to get up for my regular 5:30am runs. Honestly, a majority of the time I’d hit “snooze” and enjoyed an extended hibernation curled up in warm flannel sheets. February was the same thing… snooze button!!! I probably should have signed up for a running clinic to keep myself motivated… could have… would have… should have!!! Why is hindsight always 20/20?

I never thought the day would come, but it got to the point where I no longer enjoyed running!!! Mid-February I hit a wall (metaphorically speaking) and I decided to take a break from running. I figured that I still I had lots of time to train for my race against Jonathan and that I was probably over-training and experiencing fatigue. I decided that a break would help me bounce back in the Spring! Well let this be a lesson to everyone… unless you are injured… a hiatus from running is not a good idea (especially when you are scheduled to race a tri-athlete in 2 months time).

Meanwhile in early February, Jonathan got the go-ahead from his doctor to start running again. He texted me micro-seconds after his “first run” to let me know he finished 5K in 21 minutes. A couple weeks later he texted me again… guess what? 20 minutes! This man must be stopped or at least slowed down! Wasn’t Jonathan the one who wasn’t going to train for this race? Maybe that’s why he has medals and well… I don’t! In Jonathan’s defense, he has been a good support system for me and does encourage me that my speed will improve again someday (just probably not in time for our race). He says that I just need to be patient.

In March, I decided to start training again. I used to barely break a sweat running 5K, now 2K into my run I was ready for a nap! Oh and my time, over 32 minutes for 5K! What was happening to me? Well… a 29.5lb weight gain is what happened to me! I was in complete shock when I saw the number on the scale. How could I possibly have packed on so much weight in 3 months? Well truth be told, the lack of physical activity over the winter and the ice cream I was consuming every night while watching Coronation Street probably wasn’t helping!

With 45 days until the race, I finally said to myself “enough is enough” and my training went hardcore! It’s still dark in the mornings, so I’m running 5 days a week after work with friends, co-workers or at the Running Room practice runs. Though I used to thrive on the solitude of early morning runs, I’ve rejuvenated my passion for running by joining others in their training. I also enrolled into fitness bootcamp classes twice a week (to strengthen my entire body, especially my core)! Probably the most important thing, I’m getting my food back on track. After losing 120lbs over the last 2 years, I know what foods I should and shouldn’t eat, but until I instinctively start fueling my body like an athlete again, I’ve decided to regularly meet with a dietician!

The handicap is yet to be decided. It will be fair and the goal is to make our race time within 1 minute of each other so then it’s exciting for those who come out to cheer us on and also make it a challenge for both of us (not just me). I have a very short time to make up for my procrastination in preparing for this race. As much as I’d enjoy torturing Jonathan with a completely unfair handicap and blowing past him on the finish line, I actually only want to win this race if I earn it!

The first week in April, my 5K time is just over 28 minutes and Jon is very close to making his sub-20! My goal for our race is still to run the 5K in 25 minutes (even if it means I throw up at the finish line)!

Rules of the race are pretty simple. No spitting, biting, pushing, scratching or kicking. Actually, no touching of any form (other than our traditional fist pump before the race). Trash-talking by the competitors and by-standers is encouraged. Performance enhancing foods or drugs are not permitted on the day of the race. This includes energy drinks or energy gels, caffeine pills or ephedrine. Our speed and endurance will be determined by the sheer willpower we have to win the trophy and a lifetime of bragging rights (well for me anyway). Lets be honest… what will Jonathan really have to brag about if he wins? I’m not quite the same level of competition that he’s used to now am I? Well maybe I am… he just doesn’t know it yet!
Posted by Michelle Kempton at Monday, March 01, 2010