Cast as the visible minority in running groups, overweight runners often struggle with more than body image - they are also trying to fit in.

In running groups across Canada, visible minority describes more than just skin colour. The body size of some of the participants makes them stand out from the crowd and weight-based discrimination is a growing problem, says Michelle Alarie, who stands five-foot-seven, with a bmi much higher than doctors recommend.

Alarie, a heavier-than-most runner, has sandy brown hair that frames her friendly round face. She doesn’t usually stand out from the crowd – until she dons her running tights for a routine run around the Halifax Commons.

“The hardest part about running isn’t necessarily the activity itself,” Alarie says, “but having the courage to put on the running gear and let the world watch you run. For me, my battles are how I’m perceived by others. I often wonder if they are laughing at me when they see me running.”

The 28-year-old Alarie completed the 2010 Halifax Hypothermic half-marathon in her first year of running. The extra weight she carries undoubtedly makes it more difficult to run, but she rarely missed a day of training in the lead-up to the race. During her half-marathon, Alarie felt like other runners were passing her like she was standing still. Most of them, she says, tried to encourage her as they went by but it wasn’t helpful. She didn’t need their approval. She knew she was doing well before anybody said a word. As soon as the comments started pouring in, Alarie started questioning if these runners were sincerely impressed by her efforts, or if they thought she wouldn’t be able to finish. Alarie wondered if they were saying the same things to the thin people they passed.

Regardless of what anyone else thought or how their comments were intended, Alarie knew that she had spent five months training for the half-marathon and she was going to finish the race running, not walking. She turned up her iPod to drown out the comments and forged ahead, completing her firstmarathon with a triumphant smile, proud of her accomplishment.

Alarie believes there’s a public perception that running is a competitive sport where only thin people succeed. Runners generally admire people who manage to qualify for the Boston Marathon or make a national team. But the plight of overweight runners often goes unnoticed. Alarie says similar to the competitive group, overweight runners train, suffer and sacrifice too.

The accomplishments of overweight runners are often ignored in post-race discussions. There’s a feeling that it’s a taboo topic, Alarie says, but it doesn’t need to be that way. Most heavier runners are comfortable discussing both their challenges and victories. If race results were categorized by weight and height – similar to some triathlons and duathlons, which have Clydesdale and Athena categories – it would greater emphasize the accomplishments of heavier runners. In Alarie’s case, she carried almost twice the weight across the finish line than the majority of the female runners in the race.

At the end of Alarie’s half-marathon, triathlete Jonathan Kirk consoled a group of runners that finished last. “The winner isn’t necessarily the first person over the finish line,” he says, “but the runner who suffered the most and still finished.”

Alarie has heard all kinds of insults since she began running. “Look out, it’s Godzilla!” she recalls hearing one day. She also witnessed the shock from a race volunteer when she arrived to pick up her race kit. Regardless of how demoralizing it’s been when people react negatively to her new-found passion, she hasn’t given up.

For many overweight runners, eating like an athlete can also be a challenge. Many of them lack the proper nutritional habits to ensure their body gets the right amount of nutrients and vitamins required for performance. “Far too often, crash diets preach high-protein, low-carbohydrate food,” says Brooke Brown, sports nutritionist and world-ranked triathlete. Regardless of body size, Brown explains to her clients that consuming adequate carbohydrates becomes even more important when exercise enters the equation. When working with overweight and obese clients, it can be a challenge to help them believe in the basic value of carbohydrates, Brown says. She encourages all clients to maintain a positive relationship with food and not to eliminate any of the food groups from their diets.

Injuries are also more of a problem for heavier runners, creating significant physical barriers that thinner people don’t have to deal with. Aches, pains, strains and shin splints are common for all runners, but added weight places additional stress on the body in many ways, says Monique Aucoin, chiropractor and Boston Marathon qualifier. The force while running is three times your body weight. That means a 125-pound runner will feel the impact of 375 pounds, while a 220-pound runner will absorb a crushing 660 pounds of force. Muscles, joints, and bones – especially in the legs and feet – feel the brunt of this, Aucoin says, adding that overweight runners will often experience arch fatigue earlier and flatten their feet too much, further increasing the injury risk. 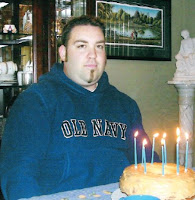 Steve Dinn, who used to weigh 330 pounds but is now a healthy weight and active, cautions against trying too much too soon. “I didn’t start running
until after I had dropped the majority of the 120 pounds that I lost,” he says. “A big reason for this was that it hurt. My ankles, knees, Achilles tendons and even sometimes my hips would hurt after only short stints on a treadmill,so I never wanted to run outside,” says Dinn, now training for his first half-marathon.

(photo on left) Steve Dinn after his weightloss.

Overweight runners, as you might expect, have difficulty shopping for running gear – nothing fits properly. Females often have no choice but to shop on the men’s side of the store in order to find an xxl shirt that will fit. Melanie Keats, an exercise psychologist at Dalhousie University, says body-image concerns and anxiety about the way we look is directly linked with negative feelings towards exercise. You’ll often see heavyset runners in loose sweat pants and baggy cotton t-shirts, she says, which perpetuates stereotypes of overweight people being sloppy and lazy. But many larger runners would enjoy wearing compression gear or the latest wicking technology, if it were available in their sizes.

The media plays a significant role in discouraging heavy runners too – most magazines and advertisements feature zero-body-fat models. There are few, if any, images of obese runners, making overweight runners again feel like outsiders. A number of studies have proven that anti-fat stereotyping
is widespread and deeply ingrained in our culture, Keats says. This type of bias results in social isolation, reduced performance expectations and lessened self-confidence.

“While I aspire to look like the person on the magazine cover,” Alarie says, “I know it’s not physically possible. I’m not petite, I’m built like a bulldozer. I’m strong and sturdy, not delicate and light on my feet like average runners, so I find it hard to relate.”

This isn’t just a female issue, Dinn says. “Calling myself a ‘runner’ is something I still can’t manage to do. I don’t feel like a runner, nor am I sure I ever will. I even feel guilty about buying something at the Running Room, because I don’t think I belong there. I’ll settle for calling myself
‘one of those people who has completed a half-marathon.’”

Rami Bardeesy and Stacy Chesnutt, two of the fastest distance runners in Nova Scotia, believe that everyone tying up their laces and training is “a runner” – no other label required. The only difference is that on race-day some runners show up to compete and others are there
to participate.

Bardeesy and Chesnutt have the utmost respect for overweight runners and are often inspired and motivated when they
see someone learning to run, trying to become healthy.

Chesnutt shared a personal a story about her sister, who struggled with her weight. “It never occurred to me that my sister wasn’t running because she was too overweight to run. I just knew that running was ‘my thing’ and not hers.” After Chesnutt’s sister, Paige, lost 125 pounds she started
to run and race too. “I am incredibly proud of my sister, because after she lost 125 pounds she became this insanely confident woman who loves to run and race. It’s funny because she’s obsessed with how she finishes and wants to place in her age group every time she races. In this regard, she really is more competitive than me.”

Bardeesy and Chesnutt empathized with Alarie’s struggles and shared stories of how they have experienced similar issues like being heckled by strangers and struggling to find clothes that fit well.

There are some solutions, Alarie proposes. She and Dinn want race organizers to make modifications to accommodate overweight and obese runners such as larger t-shirts and staggered start times – allowing slower runners to start with the walkers – making it possible for them to finish with the majority of the runners. Pace bunnies are often too fast for the slowest groups of runners in a half-marathon or marathon, and they also want race directors to look at tweaking that system.

A small number of races have already made some key changes in Nova Scotia, with a few events implementing the advanced start times.

Nancy Holland, director of Run Nova Scotia, believes overweight runners are accepted within the running community. “Size doesn’t matter,” she says. “Line up any 20 ‘average’ runners and you’ll see a full range of sizes.” When it comes to making further changes, Holland says she’s happy to discuss it, but so far nobody has f lagged it as a major concern. “At the moment, it’s not an issue. If it becomes an issue, we’ll deal with it.”

For Alarie, there’s still a long way to go before she feels accepted by the broad running community. She hasn’t always experienced positive reactions from strangers, but she’s grateful to have a group that supports her. “Despite the challenges I face with running, whether physical or mental, I have a new-found passion and I wouldn’t trade it for anything in the world.”

Michelle Kempton has overcome her own weight issues and recently started a running group with friends called Heart & Sole Running Club in Dartmouth, N.S.
Posted by Michelle Kempton at Saturday, May 01, 2010