Runners come in all shapes, sizes… and speeds! 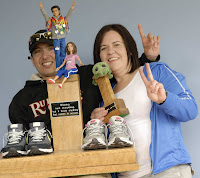 Over the last 6 months, Jonathan and I have laughed, trash talked, at times annoyed each other, and we trained for our little competition. We both gave the race our best effort, but in the end, I lost fair and square. To say I’m not disappointed would be a lie, but there was more to this experience than the 30 minute window that it took us to actually run in the race or who finished first.

As race day approached, I became nervous. The day of the race, I woke up at 5:30am and I had a knot in my stomach. I wanted to vomit and that feeling pretty much didn’t go away until the victory party. I showed up at the race confident in the handicap that we had agreed upon. Even though people from across Canada submitted hilarious ideas of how I could completely torture Jonathan (of course all in my favor and ensuring my win), in the end we picked a handicap that was fair to both of us (giving me an 8 minute head-start). This was the current difference between our 5K runs. Our trial times a couple days before the race (on the actual race route) proved that this handicap could make it anyone’s race. I thought for sure that I had enough “heart” to push it further than Jon on May 1st and win… but unfortunately I didn’t. I found a quote that pretty much sums up how I feel about losing “The next best thing to winning is losing! At least you've been in the race.” 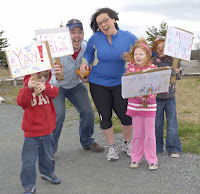 Two years ago, I was too intimidated to even walk into a Running Room store, let alone challenge a tri-athlete to a race. This was all based on my insecurity from weighing 285lbs. It took me a year of running in the solitude of the boardwalk (where very few would see me) to lose enough weight that I felt comfortable to run with others. But even then, because I didn’t fit the “physical profile” of how I defined a runner, I didn’t consider myself one. Once I lost 120lbs, my strength and courage increased and I decided that I was ready to run with “real runners” at the Running Room.

The first day that I met Jonathan, he made fun of the wear-marks on my sneakers. I was about to start teaching Learn to Run clinics at the Running Room and I couldn’t possibly show up with sneakers completely shredded at the ankles. At the time, I had no idea what was causing this bizarre wear pattern in every pair of sneakers that I owned. As Bruce (the Halifax store manager) fitted me for my first pair of proper running sneakers, Jonathan took great pleasure in initiating me as one of their new running instructors, by impersonating my goofy ankle kicking run around the store. We laughed and there was an immediate connection between the two of us… I knew then and there… Jonathan and I would become either close friends or mortal enemies!

Jonathan and I were a very unlikely duo, mere strangers 8 months ago and now he’s someone I consider a BFF. Even though we trash talk each other in public and I thoroughly enjoyed casting him in the role of the villain, in reality, Jonathan was one of my strongest advocates. A true demonstration of Jon’s character was obvious to everyone that showed up to watch the race. Jonathan ran hard, as he promised me he would (knocking an impressive 2 minutes off his regular 5K time during our race). He understood and respected that I didn’t want to win unless I earned it. After Jonathan won the race, he went back about 100 feet from the finish line and cheered me through until the end. When I bent over at the finish line ready to throw-up, he stood me up and walked with me until the sick feeling passed. He took me aside, consoled my spirit from the loss with hugs, offered support and encouraging words (like only a world-class coach would do). Mad props to Jonathan for being a patient friend, a fierce competitor, a fast runner and a graceful winner.

Enough about him… now back to me! [smiles] Though I have not increased my speed a great deal over the last 6 months and most days I feel like I have the grace of an elephant when I run, I did improve one thing… I no longer kick my ankles!

As a result of this challenge I now have a new belief system… that you don’t have to look like a jock to be a runner. Runners come in all shapes, sizes… and speeds. I can now call myself a runner. I feel like I belong to a group of athletes and deserve to be in races because I train. Even though I’m a curvy 36 year old, I’m still an athlete. I’m faster than some and slower than others… but my speed doesn’t make me any more or less of a runner than anyone else that laces up their sneakers and pushes forward. No matter if you are wearing a pair of old sweats or the latest high-tech, color co-coordinated running gear… you are a runner. You can be a beanpole, muscular or even over-weight and if you move with a stride faster than a walk and push yourself… then you are a runner.

We both will be in the Johnny Miles race in June. I will definitely manage to get over the finish line before Jonathan that day, but only because I’m running 10K and he’s running the ½ marathon. Even with Jonathan running twice as far as me, he will probably only be about 30 minutes behind me. I’m looking forward to returning the favor by cheering him on as he finishes. If he feels sick… I’ll make sure he stands up-right and walks it off… because that’s what friends do.

For those of you curious about our times. Jon ran his 5K in 18 mins 10 seconds and I finished mine in 28 mins 3 seconds. Was I disappointed with my time? Absolutely. Shoot… I delivered my twins faster than I ran that 5K! But I learned so much about myself, made a wonderful friend and in the end it was an amazing test of perseverance, a demonstration of friendship and a voyage of soul searching (especially when I lost). Most importantly we had fun before, during and after the race!

Am I glad that we raced? Yes!!! Will there be a re-match? Definitely not!!! 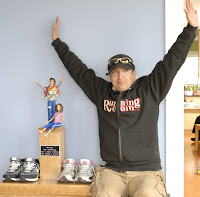 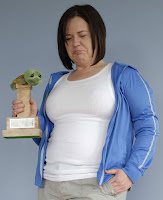