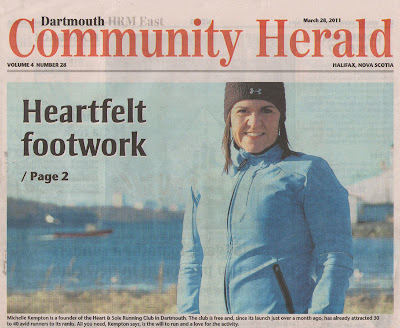 Michelle Kempton is a founder of the Heart & Sole Running Club in Dartmouth. The club is free and, since its launch just over a month ago, has already attracted between 30 and 40 avid runners to its ranks. All you need, Kempton says, is the will to run and a love for the activity.

Whether you want to just get out for some fresh air and socialize for a five-kilometre run, or are training for a 20-kilometre marathon, there’s a spot for you at the new Heart & Sole Running Club in Dartmouth.

"We have everybody covered, we have everybody from . . . weekend warriors, who are doing it just to stay fit, and then we have people who compete in races," Michelle Kempton, one of the social running club founders, said in an interview.

"We have a lot of people now training for the Blue Nose (Marathon) that are running with us, different distances. And it’s just a good way to find other people to run with."

Joining the club is free. And you don’t have to live in Dartmouth to run with Heart & Sole, but "you do need to be brave enough to tackle our hills," the club website says.

Kempton, of Cow Bay, has struggled with weight issues all her life. When she began running two years ago, she tipped the scales at 250 pounds. But with a lot of hard work, she lost 120 pounds, 85 of which she attributes directly to running.

"It just changes your life and it’s all possible but you do have to take small steps."

Kempton and five other friends, who had been running together, started the club in mid-February.

"And we told a few friends and by word of mouth, it’s just taken off," Kempton said.

Still in its infancy, the club already has 30 to 40 runners showing up each week. To date, most of them are from Dartmouth.

"It’s a support system for each other and because there’s such a mix of people, if you need help or you want to find a running partner, this is an opportunity to do it," Kempton said of the all-weather club.

"It’s a lot easier on cold winter days or rainy spring days to go out and run when you know that there’s friends out there that are going to be with you."

At 9 a.m. each Sunday, they do a nice run around Dartmouth and at 6 p.m. on Wednesdays, they either do hill training or speed training at a track and run short distances.

"There’s a power in doing it as a group; it feels good, there’s momentum that you don’t necessarily get when you’re by yourself," Kempton said.

Though they meet and run as a group, each runner is responsible for his/her own safety, training and achieving personal running goals.

"If you have a passion for running, this is the club for you," Kempton said. "It doesn’t matter if you win races or if you’re just doing it on the weekends to run, everybody is welcome."