A Race Across the Sky 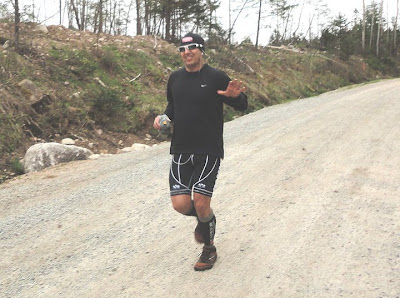 John Kirk of Halifax is competing in the Leadville 100 ultramarathon on August 20th in Colorado.

Halifax native Jon Kirk is travelling to Leadville, Colorado where he’ll acclimatize his body to extreme altitudes over the next 3 weeks in preparation for the most challenging race of his extensive running career.

After 6 Ironmans, 20+ marathons and 40+ half-marathons, last summer Kirk set his sights on becoming an ultramarathoner. Kirk committed to spending most of his spare time over the next year training for the Leadville 100 race, which will start in the dark at 4am on August 20, 2011. The Leadville 100 is considered one of the most challenging trail ultramarathons in North America.

Runners have 30 hours to run 100 Miles (160KM) through the Colorado mountains, climbing and descending 15,600 feet on trails and back roads, with elevations starting at 10,200ft above sea level. During the Leadville 100, sleep won’t be an option, oxygen will be a luxury and snow on parts of the trail is likely (even in the middle of the summer).

Finishing isn’t a guarantee for all racers, actually on average only 50% of the participants successfully cross the finish line under the 30 hour time limit. Kirk is confident he’s as prepared as he can be for the challenge.

When asked what the best part about finishing Leadville will be, Kirk says “the bling”. Leadville’s infamous medal for race finishers is a massive belt buckle and without question is the envy of any runner who doesn’t have one but dreams of completing an ultra on day.

Michelle Kempton lives in Dartmouth and is a co-founder of the Heart and Sole Running Club. Check out their website at www.heartandsolerunningclub.com and follow them on twitter @runindartmouth.